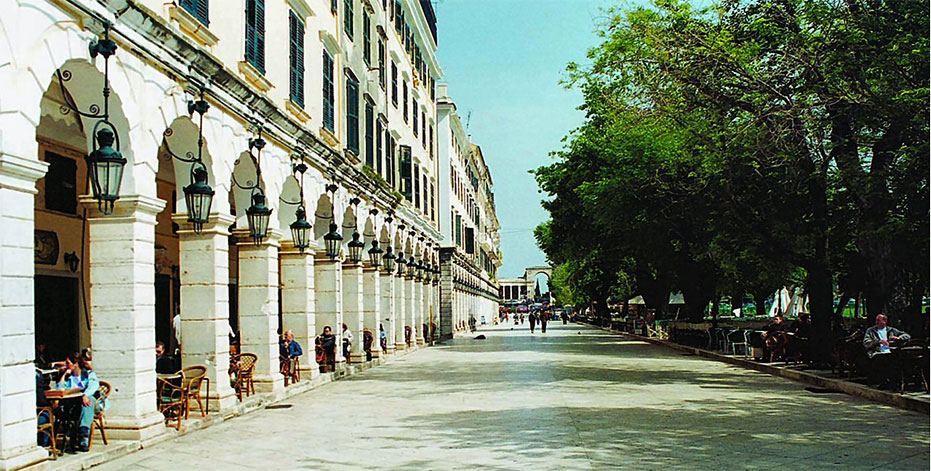 The Achillion Palace can be found in the Village of Gastouri, 10 km’s south west of the town of Corfu. It's one the most known sightseeing in Corfu. The Achillion Palace was built in 1889-1891 as the home of Princess Elisabeth von Witelsbach of Austria (known as Princess Sissy). The palace took its name from the Greek mythological hero Achilles.

Achillion is famous for its wonderful gardens that are decorated with exotic flowers, palm trees and many age long trees. But the most impressive part of it is the statues.

The famous Pontikonisi, at the entrance of the lagoon Halikiopoulou, owes its name to the tiny size has becoming the trademark of the island.

It constitutes the most picturesque from the landscapes of Corfu in combination with the abbey of Vlaherena.

Characteristic of this island is the dense vegetation and the Byzantine church of Pantokratoras dated from the 13th century.

The impressive group of residences in Spianada, the famous Liston, was built between 1807 and 1814. It is a group of buildings that are developed linearly in front of Spianada square. The name Liston was given by the Kerkyreans and it comes from the word “list” in the Venetian dialect that means “straight line”, or maybe, because mainly those registered in the list of the city's aristocrats used to walk along its pavements.

The arcades, in the ground floor of Liston, have for many years been used for recreation, entertaining restaurants and cafes. Liston always constituted the most social point of the city and a place for meetings and entertainment for the aristocrats of the city.